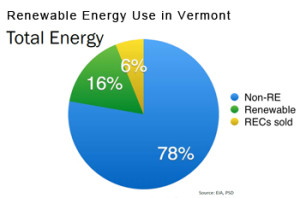 The Public Service Department is undertaking a Total Energy Study (TES) to identify the most promising policy and technology pathways to employ in order to reach Vermont’s energy and greenhouse gas goals. The TES is a multi-phased process, with the TES Final Report is expected to be released in the summer of 2014. The TES process includes many opportunities for public input.

On December 15, 2013, the PSD completed a TES Legislative Report and Appendixes. The purpose of this report is to inform the Legislature and the public of progress to date in carrying out the TES. A public comment period on the draft closed January 22, 2014.