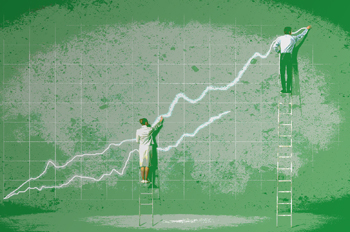 Maintaining a reliable electric system involves careful long‐range planning. Every three years VELCO, the owner and operator of Vermont’s transmission system, performs a detailed analysis that identifies reliability concerns and where transmission alternatives may be used to address those concerns. VELCO collaborates with the Vermont distribution utilities, and other stakeholders to finalize the plan, which then guides grid reliability efforts.

Grid planning in Vermont must balance three tensions. The first is the tension between state and federal regulations that are not completely complementary. Federal policy sets explicit, mandatory reliability criteria for transmission system design, while state policy is much less explicit and more diverse in its criteria for evaluating transmission upgrades against other alternatives. Second, state standards favor transparency and full public disclosure about transmission planning while federal rules governing Critical Energy Infrastructure Information treat detailed transmission planning data as sensitive information that must be protected to guard homeland security. Third, while the playing field is more level than in the past, regional treatment of transmission solutions and their alternatives, energy efficiency and generation, do not enjoy the same levels of cost support. 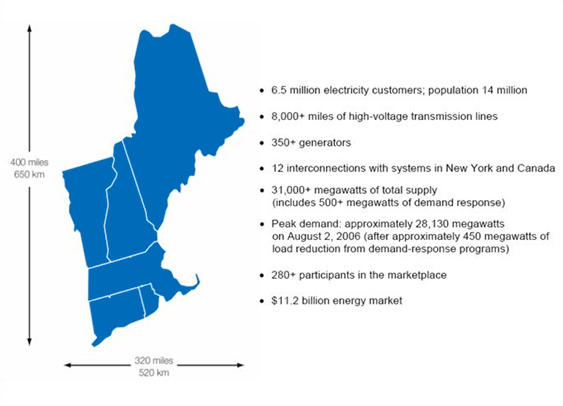 Power systems have been called the most complex machines in the world because the electricity being made by power plants and delivered via the transmission and distribution wires must be in perfect balance with the electricity demanded by all customers at all times. Vermont’s transmission system is interconnected with other utility transmission systems across New England, Canada and New York, which requires close coordination with these other states and regions to ensure that electricity is provided reliably and at an affordable cost.

ISO‐NE reviews and decides to approve or not approve upgrades, modifications and additions to the New England transmission system, including Vermont. If a transmission project is deemed to provide reliability or economic benefit to New England, ISO‐NE will categorize the project as a Regional Benefit Upgrade and the cost of that project will be shared throughout the New England states using a funding mechanism called Pool Transmission Facilities (PTF) funding. Most of the transmission reinforcement needs discussed in this Plan would likely be deemed by ISO‐NE as benefitting all of New England. Vermont’s share of any regionally funded transmission project, whether in or out of state, is approximately four percent of the cost, which reflects Vermont’s percent share of New England electric load.

Regional sharing of funding for transmission projects has been present in New England for about a decade. Since 2008, through the creation of a regional energy market called the forward capacity market, developers of generation and energy efficiency are compensated through regional funding for their capacity to contribute to meeting the region’s future electric demand. These energy supplies may reduce the need for building transmission. Since the funding mechanisms are not identical and complete parity has not yet been achieved, Vermont continues to advocate at the regional level for leveling the playing field between transmission and non‐transmission resources.

The planning process described here—and the focus of the VSPC process—is focused specifically and exclusively on the identification of issues and possible solutions to meet reliability standards. Transmission projects designed to meet other needs around New England, such as bringing renewable or low‐cost power to customers, are under discussion around the region but follow a different process.

Electric utilities generally interconnect within logical geographic regions, also called “power pools,” that are sufficiently large to achieve reliability and economy‐of‐scale benefits. Although these power pools have ties with neighboring regions’ power pools, they often directly generate most of the electricity consumed within their region. While this is the case for New England as a whole, for Vermont, these interconnections are even more critical. On a peak demand day in summer, Vermont may import between 75 percent and 90 percent of its electric demand via its transmission tie‐lines with Vermont Yankee and Highgate, Canada, and the rest of New England—sources located at the edges or outside of Vermont. Vermont is therefore highly dependent upon the transmission network.

The 2003 blackout affecting 50 million people in the US and Canada led to more stringent requirements for transmission planning. The Federal Energy Policy Act of 2005 (the “Act”) sought to prevent future large‐scale blackouts and other electric reliability issues by making national reliability standards mandatory. Since June 4, 2007, users, owners and operators of transmission systems within the 48 contiguous states can be severely penalized for failing to comply with 83 electric reliability standards approved by the U.S. Federal Energy Regulatory Commission (FERC). Violation of any of the 83 standards is potentially subject to a penalty of up to $1 million per day.

If the transmission system fails, then large regions of the power system can experience a blackout. Achieving a high degree of reliability requires the system to have redundant features and excess capacity so that there is flexibility to reroute power due to equipment failures or when weather, accidents or other catastrophes cause a problem on the system.

Three out of the 83 national standards are particularly significant to planning for transmission system reliability. The first standard requires analyzing the transmission system using a scenario, called “N minus zero” (N‐0 ) where “N” represents normal operating conditions for a given set of system components. Electric systems contain thousands of pieces of critical equipment, such as transformers, that will occasionally fail. To provide another layer of protection, utility planners must look at adding system backup, or robustness, to cover a second scenario called a “single contingency situation,” such as the failure of a transformer or a lightning strike that causes the outage of a transmission line. These so‐called single contingency scenarios are known as “N minus one” (N‐1) conditions. The general philosophy is that no single failure of a piece of equipment connected to or comprising the transmission network should cause a large number of customers to lose power. Transmission designers further test the system design by looking at scenarios involving two or more equipment failures (known as “N minus one minus one” scenarios or “N‐1‐1”). To recognize the specific regional attributes of its transmission grid, ISO‐NE has additional planning standards. For example, the system must be designed so that it can handle electric demand under extreme weather conditions (the so‐called “90/10 load"), the outage of the two most critical generators, and limitations on the use of fossil fuel–fired peaking generation units.

By using these and other criteria to plan and design the generation and transmission system, transmission utilities seek to ensure that customers rarely lose power because of a problem in these parts of the system. Most customer outages are caused by a local problem on the distribution system such as a tree coming in contact with an overhead wire.

VELCO, the owner and operator of Vermont’s transmission grid, is required to publish a Long‐Range Transmission Plan that looks out 20 years and is updated every three years. The Plan analyzes the transmission system and serves as the foundation for a process that considers where transmission upgrades are needed and where alternatives can be employed. The intent of system planning is to assess the transmission system’s needs over time as things such as peak load levels and generation resources change. In addition VELCO must comply with the previously mentioned planning requirements of ISO‐NE and federal agencies such as the FERC.

The Vermont planning process is designed to facilitate full, fair and timely consideration of non‐transmission alternatives to new transmission projects where such alternatives are cost‐effective and meet design and reliability criteria. It accomplishes this goal through the VSPC, which increases collaboration among utilities, increases transparency of the process, and involves the public in decisions about alternatives. In addition, the new process extends the planning horizon from 10 to 20 years, which provides time to fully consider all alternatives. 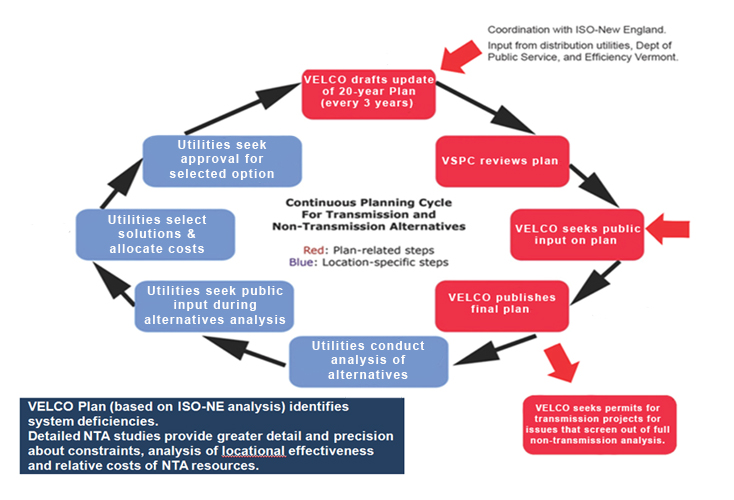